Visit Albania: Free Travel Guide to the Land of Eagles Discover mountains, castles, beaches and the old towns of Berat and Gjirokastra. 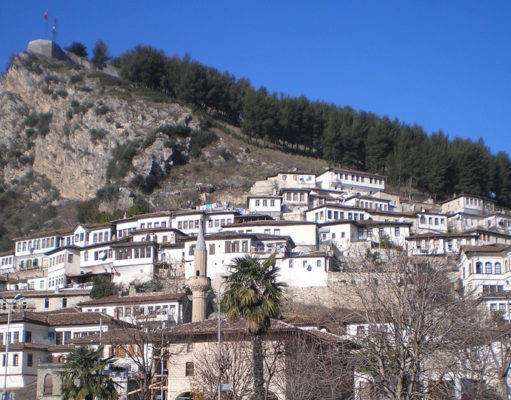 Historic Centres of Berat and Gjirokastra 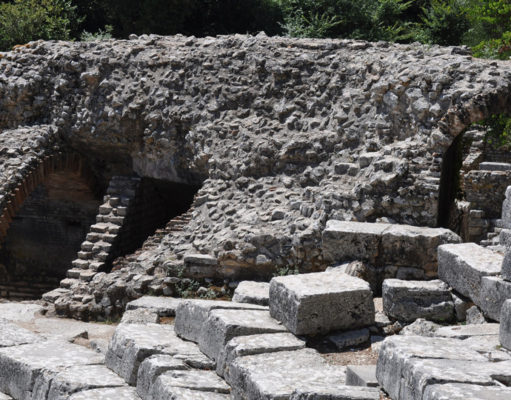 Everything you need to plan your visit to Albania. Start with our Quicklinks to zero in on a city, region or popular destination. Learn more from our introductory articles about the history, geography, culture, attractions and cuisine. Explore sightseeing recommendations, activities, food, lodging, entertainment, festivals and events. No time to do all this online? Download a free Albania Travel Guide or have Amazon deliver one to you door.

Albania is a small country on the west coast of the Balkan Penninsula. After surviving a dark and isolating 20th century communist regime, Albania has emerged in the 21st century with a new vitality and excitement welcoming visitors from around the world. Be sure to visit Tirana, the thriving capital city, Shkoder, the historical center of Albanian culture, and any of the seaside towns, with their beautiful sand beaches.

Albania boasts four sites inscribed on the UNESCO World Heritage List. Butrint is the largest Ancient Greek archaeological site in Albania, located in the far south of the country. The old city centers of Berat and Gjirokastra contain rare examples of Ottoman period architecture. The Lake Ohrid Region, shared with North Macedonia, displays both cultural and natural significance, and the Primeval Beech Forests in the north and east of the country join a network of related sites stretching across 12 European countries.

Stunning mountain landscapes and beautiful seashores are a delight for the eyes. Albania abounds in friendly people, remote villages and concrete dome bunkers, an odd remnant of its communist past that still dot the landscape throughout the country.

Evidence of prehistoric habitation has been found in Albania dating from the Paleolithic era, including stone and bone tools similar to nearby ares in present day Montenegro and northern Greece. In about 1600 BCE, a portion of the local population migrated south and established the Mycenaean Civilization on the Peloponnese.

Numerous tribes occupied the area in antiquity ,most prominently the Illyrians, whose name was used by Greek and Roman authors as an umbrella term to describe all the local tribes together. The Illyrians fought neighboring countries for centuries, losing to both the Greeks and later the Romans before eventually being incorporated into the Roman Empire.

The Middle Ages brought about the coalescence of the Albanian people and the rise of the first Albanian state. Following the upheaval of the crusades, Albania fell under the sway of the Ottoman Empire and remained under their domination for most of the next 500 years. Albania was freed finally in 1912 at the end of the First Balkan War.

The state remained unstable, pressured, and occupied by outside forces until after WWII, when Enver Hoxha consolidated his control and led Albania into a dark, isolated period of communist rule. This ended only with the collapse of communism in eastern Europe at the end of the 1980s.

Since then Albania has struggled to bring itself into the modern age.

Albania is a country on the Balkan peninsula, with an area of 28,748 sq. km. (11,100 sq. mi.), similar in size to the U.S. state of Maryland. It borders Montenegro to the northwest, Kosovo to the northeast, North Macedonia to the east, and Greece to the southeast and south. It possesses coastline of 316 km. (196 mi.) on the Adriatic and Ionian Seas.

Albania is known for its diversified topography. The interior of the country is mostly mountainous, including the Albanian Alps and the Sharr Mountains in the north, the Skanderbeg and Korab Mountains in the center, and the Pindus and Ceraurian Mountains in the south. Mt Korab (elevation 2,764 m./9,068 ft.), on the Albania / North Macedonia border, is the highest peak in both countries and the fourth highest on the Balkan Peninsula.

The coastal lowlands in the west of the country are by and large an alluvial plain, with rich, productive soil. Most of the population lives here.

Albania boasts eight river systems running through it and over 250 lakes. The catchment basis of the river Drin is one of the most biologically diverse regions of Europe. Lake Shkodra, shared with neighboring Montenegro, is the largest lake in southern Europe. Lake Ohrid, shared with North Macedonia, is one of the oldest lakes in the world. The Prespa Lakes, shared with North Macedonia and Greece, is home to Prespa National Park. The Ohrid-Prespa Transboundary Reserve is part of UNESCO’s World Network of Biosphere Reserves.

Albania has one of the most homogeneous populations in Europe, with over 90% of the inhabitants claiming Albanian ethnicity. Their traditional culture is said to spring from Illyrian roots dating back to prehistoric times, with influences from Greeks, Romans, Byzantines and Ottomans shaping it into what exists today.

Albanian people can be divided into two distinct groups, the northern Ghegs and the southern Tosks. Although distinct, both identify strongly with their shared national identity and culture. Traditional Albanian social structure is based on clans, and the concept of Besa, a code of honor between people of good faith, is an important component in Albanian ethics and community life.

Religious tolerance is an important value in Albanian society.

Dita e Mësuesit, or Teachers Day (7 March) Celebrated throughout the country to commemorate the opening of the first Albanian language school on 7 March 1887.

Dita e Verës or Verëza (14 March) A festival and pagan holiday celebrating the end of winter and the rebirth of spring. This holiday coincides with the first three days of the new year in the old Albanian calendar.

Independence Day (28 November.) Celebrations throughout the country, with festive and military parades in the major cities.

These are our top recommendations for visitors to Seoul. Why the Faber dozen?

Albania: Go Your Own Way Official tourism portal of Albania.