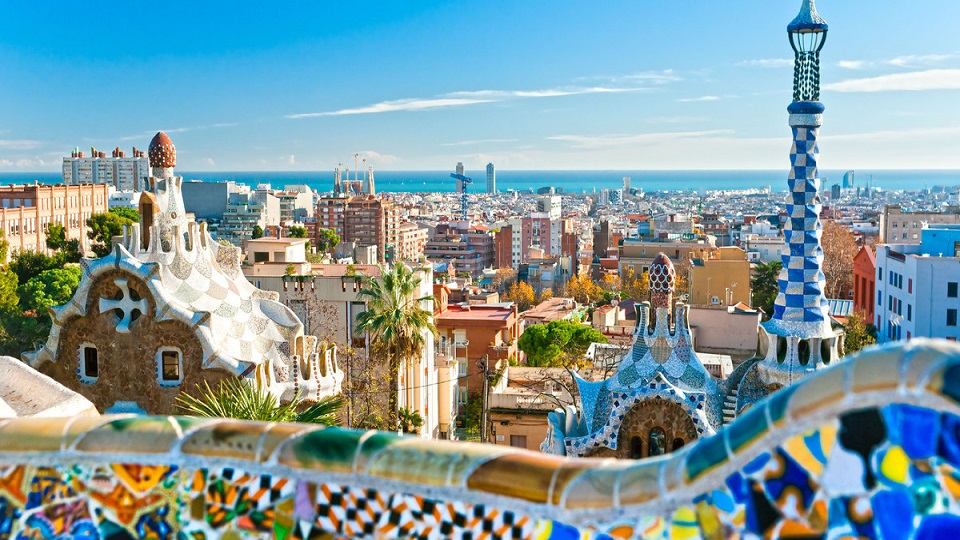 Everything you need to know to plan a visit to Barcelona. Start with these Quicklinks to zero in on a neighborhood or popular attraction. Learn more from our introductory article and links to the local history timeline. Explore recommendations for sights, activities, food, lodging, entertainment, and festivals and events.

Barcelona is the capital of the autonomous region Catalonia located in the north-east of Spain. The city is one of the most densely populated urban areas in Europe with population of around 4.8 million people. Barcelona is a coastal city on the Mediterranean offering everything the sea can give. Barcelona is vibrant and full of life at any time of the year. It has a Mediterranean climate with hot and dry summers and mild winters. The perfect time to visit this colorful city is April through June but any other month would be also worth it. Barcelona has a great variety of attractions – nightlife, beaches, museums, restaurants and markets, and last but not least – unique architecture some of which created by one the greatest artists of the 20th century Antoni Gaudi.

Whether you are on a family trip, or a fun holiday with friends or even on a romantic getaway – Barcelona won`t let you down.

These are our top recommendations for visitors to Barcelona.

La Sagrada Familia – one of the most interesting architectural achievements of Antoni Gaudi, La Sagrada familia is more than just a church. It is a statement of modern architecture, a showcase of imagination beyond this world. The first impression when one sees this building is of a sand castle, big and breathtaking. A symbol of Barcelona which is a must see for every visitor.

Park Guell – Another creation of the genius Antoni Gaudi, the park was built from 1900 to 1914 as a housing site, by the order of Count Eusebi Guell. The park was open for public in 1926 and declared a UNESCO World Heritage Site in 1084. The park is like no other park in the world, giving the feeling of being in a dream or a fairy tale.

Cuitadella park –17 acres of calm and peaceful oasis in the heart of Barcelona. Created in 1877 the park is perfect for a quiet afternoon getaway. It offers to its visitors many attractions such as a zoo, a lake where one can hire a rowing boat, the famous monumental Cascada inspired by the Trevi fountain in Rome, few museums including The Natural History Museum of Barcelona and other interesting sites. The admission to the park is free and easily accessible by Metro.

Casa Batillo and Casa Mila – another two of Antoni Gaudi`s masterpieces built as residential buildings. Casa Batillo or also known as The house of Bones. In 1904 the Batillo family commissioned Gaudi to design a home and instead of tearing down the old and construct a new building, he decided to renovate the one that was already there. The unusual and unique interior and façade of Casa Batillo is typical for the work of Gaudi, representing the Art Nouveau style. Casa Mila is also a residential building designed and build between 1906 and 1912.  The construction has no edges inside or out, designed with a constant flow or curve. Both buildings are typical for the unique mind of Gaudi and a must see in Barcelona.

Mercado de la Boqueria – one of the most popular and famous food markets in Europe offers everything the senses can desire. One can find a plenitude of colorful fruits and vegetables or seafood, abundance of bars and restaurants offering fresh produce every day. The entrance to this open market is from la Rambla street right in the center of Barcelona.

La Rambla – the wide and long pedestrian street, stretching for 1.2 kilometers (0.75 miles) from Port Vell to Placa de Catalunya. The street is usually crowded with tourists especially in high season, but the charm of this green and wide street is undeniable at all times of the year. A usual sight are street artists, kiosks selling flowers, souvenirs, etc. and of course outside restaurants offering tapas  and sangria.

Placa Reial or the Royal Plaza is a beautiful square in the center of Barcelona, closed between the buildings just off La Rambla street. It is a popular meeting place with many bars, restaurants and cafes. The square is especially beautiful by night, with many palm trees and a fountain in the middle. Interesting fact – the square is twinning with Plaza Garibaldi in Mexico City.

Barcelona Zoo – One of the oldest and most modern zoos in Europe, the Barcelona zoo is located in the Cuitadella park and boasts with 400 different animal species over 32 acres of land. The Barcelona zoo is famous for had been the home of Snowflake – the albino gorilla, who was kept there from 1966 until his death in 2003.

Barceloneta – the fishing district and its beach is a perfect place for relaxing during the day – whether you want to spend it tanning, swimming or just having a stroll along the beach. You can see a few funky art projects on the way – the Frank Gehry`s emblematic Golden Fish sculpture or the so called “The cubes” – a modernist sculpture by Rebecca Horn consisting of four cuber stacked on top of each other. One can find a variety of places to eat and drink in Barceloneta, with many beach bars to choose from.

Picasso museum – the Picasso museum is a must for every art lover. Located in the Gothic quarter of Barcelona, this museum offers a permanent collection consisting of 3500 works of the artist. The museum itself is an interesting site – housed in 5 adjoining medieval palaces together. Besides the drawings and painting exhibited, visitors can also see 42 pieces of ceramic (vases, dishes and plates) by Picasso.

Horta Labyrinth – located in of the most romantic parks in Barcelona – Park Laberint Horta with main attraction – the cyprus bush labyrinth. The area of the labyrinth covers 45X50 meters. Once you make your way to the center, you will see a statue of Eros. The maze is not extremely difficult one, so no one can get lost.The park boasts with a variety of plants and wild-life – peacocks, swans and ducks can be seen everywhere around the park . There are beautiful streams and fountains, making it feel like a little part of Eden.

Botero`s Cat –  a bronze sculpture work of the Colombian artist Fernando Botero.  The cat sculpture, known by the locals as el Gato, arrived in Barcelona 1987 and before settling in its permanent place in the Raval neighborhood, it has been placed in various other locations throughout the city. The sculpture is a of a big, chubby cat, that is now one of the symbols of Barcelona. It represents the unique style of the artist who is famous for his oversized, voluptuous figures of animals and people.

Gothic Quarter – one of the most famous and beautiful Barcelona landmarks, this neighborhood is located in the heart of the old town between La Rambla and Via Laietana, starting at the seafront. Narrow streets, a fusion of medieval and modern buildings, a Gothic cathedral, many bars and restaurants and of course the lively Placa Reial are all there, pleasantly inviting everyone to touch and feel the atmosphere of the Gothic quarter.

The Magic Fountain – designed in 1929 for the Universal Exhibition and later restored for the Olympic games in 1992, this Barcelona site gives a spectacular water and music show every evening for an hour for those who decide to make their way to it. The Magic Fountains shows are free to attend.

See and Do in Barcelona

Hungry? There are a few options where you can try traditional Spanish and Catalan dishes.

Sésamo restaurant in Sant Antoni neighborhood offers traditional dishes with a twist, perfect for those looking for a vegetarian or vegan option offering mainly tapas but also has a daily specials. What to try: Escalivada (toasted bread with a topping of charcoal grilled peppers and eggplant, sometimes topped with anchovy). Tomato and smoked watermelon gazpacho, or go for the tasting menu option including 7 tapas dishes including wine.

Cafe Catalunya  on Placa de Ctalunya is a great option for those looking for traditional Spanish dishes and Mediterranean cuisine. What to try: any of the seafood dishes with a daily fresh catch bought form La Boqueria.

La Candela restaurant is located in the district of Born in Barcelona behind the Palau de la Musica. It`s beautiful terrace is an inviting place for sitting under the shades and overlooking the Pere de les Puelles church. La Candela offers  a set lunch menu as well as a la carte. The ciusine is original and seasonal with fresh ingredients. It is a beautiful find for everyone.

The biggest event in Gadsden Alabama, held on the first Friday of every month, 18:00-21:00. Hundreds of classic cars come out and line the streets. Live music, street food, shopping. Join the fun!

11 Words that mean something completely different in Alabama

Gadsden Alabama is a fun place to visit anytime of year, with a lot of local activities and events to make it interesting whenever you choose to visit.

Weather wise, the best times to visit Gadsden are from early May to mid June and late August to early October, when the skies are relatively clear and temperatures mild. Mid-summer days can be too hot for anything but water activities.